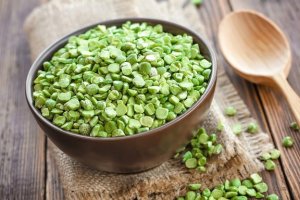 Pea owes its modern name to the Ancient Greek word “pisson” which was renamed to the Latin word “pisum”. Later on, it was established in the Italian dialect as “pisello” and in Greek “pizelion” or “mpizelion”.
Canada is one of the largest producers of peas and especially split green peas.
Split green peas are used for the preparation of green fava and are also preferred to be used as a garnish due to their intense colour.