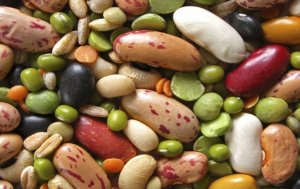 This food has been known in Crete since Minoan times and it was an offering to the Gods.

In modern history, ospriada was cooked on the day of Theofania (Epiphany), or on the Presentation of Virgin Mary, on the celebration day of Virgin Mary “Panaghia Polisporitissa”. On the Presentation of Virgin Mary, farmers used to go to the church of the village and give an amount of the pulses they wanted to sow, so that it was blessed. Then, they cooked some of the “blessed” pulses and ate this food called Maerjia and sowed the rest in their fields. On the day of Theofania, Cretan families also used to cook ospriada which was eaten not only by the family members but also by the domestic animals.

Nowadays, ospriada is known in many regions of the country and is served either as a soup or as a salad.