The unknown but beneficial “rovitsa” beans

Rovitsa or soya germ or “psilofasoulo” or “kalamatiano” bean (mungbohnen mung beans) is an extremely small green bean in the size of a lentil.

It is assumed that the name “rovitsa” is etymologically related to the ancient Greek word “orovos” / “orovion” that is the well-known fodder plant “rovi”. 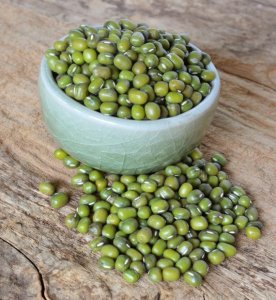 Rovitsa does not need soaking and is easy to cook, as well as rich in iron. It also contains high levels of proteins making it thus ideal for vegetarians. It is also served as a salad with spices and vegetables, but also as a soup.

In Greece, its cultivation once thrived in the plain of Messini and the surrounding area, however, it was extremely difficult to grow.

In August, producers used to unload them in the square of the village and let them dry out in the sun. Then, they used to beat the dried beans with short sticks (temples) in order to extract the small green seed, and, then, winnowing took place.

Over the years, its cultivation has gradually been abandoned and it is now imported (mostly from Australia) in order to meet the domestic demand.